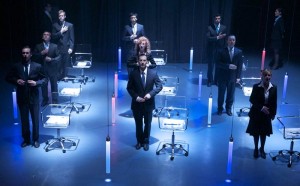 One of the opening scenes of the show (Copyright: AKA promotions)

Thanks to the lovely people at Masterclass, I had the opportunity to see ENRON at the Noel Coward Theatre this afternoon. Masterclass are a charity operated out of the Theatre Royal Haymarket, that provide young people with theatre arts experiences (workshops, seminars etc), so that they can get on in theatre themselves: from acting to directing to writing to producing.

I can barely remember the last time I set foot inside a West End theatre, and especially to see a drama so I wasn’t sure what to expect, despite the rave reviews the show has had.

The first thing to catch my eye (being of a techie persuasion) was the 12 pendant light fittings hanging at floor level as the preset.  These are presumably LED as they change colour throughout the show as they fly in and out. These move relatively independently, with the downstage-centre 6 being often at a different height to those at the perimeter and are used brilliantly and simply to denote the change of location as we move into the low/red of the Finance Department and the floor-level/white spaciousness of Skilling’s office. This synergy between the set (Anthony Ward) and lighting (Mark Henderson) continues throughout the show and is something that makes the show feel very different and very watchable.

The show also makes use of projection (Jon Driscoll). This is normally one of my pet hates to within a show (especially with the student shows I have become accustomed to), because it is notoriously hard to make work – both physically and artistically. I think the reasons it works here are two-fold: as the show is quasi-historical, it can show archive footage, which really adds to the context of the plot and also the director (Rupert Goold)has not been afraid to shadow the screen. Realistically, casting a shadow on a front-projection screen is always going to happen and unintentionally it can look terrible as it diverts attention to the shadow, but by doing it with intent, the distraction is lost and here (at least) it works perfectly.

The dance and physical theatre aspect wasn’t something I particularly expected but, together with the comic turns (such as the Lehman Brothers), give the audience a sometimes needed break from the dialogue. This is not to say that the show is wordy or too complicated, but (as someone not that familiar with the backstory – I was barely a teenager…) the show did require some thought and I think I would have been exhausted by the end was it not broken up the way it is.

In fact, this is a strength of both the writing (Lucy Prebble) and directing to tackle some fairly abstract concepts, explain them, and then anticipate where the humour should be to keep us all engaged. The only place I started to get lost was in trying to understand the ‘raptor’ metaphor used to illustrate (I think) the ever increasing debt that the executives become slaves to, but the finer details were lost on me.

As usual, I will devote the least space to the aspect that most reviews would give the majority – the performers. The large (for a drama) chorus is a nice touch and allowed for a good amount of ‘hustle and bustle’ in the busy office scenes as well as delivering the physical set pieces. The principals came across as entirely believable, although as I didn’t have any idea prior knowledge as to how they should behave, I suppose that isn’t surprising. Having said that, the whole show did exude a sense of power which I can’t quite put my finger on, but it was certainly an atmosphere that worked. I slightly question the portrayal of Andrew Fastow (Paul Chahidi) as after he pathetically climbs his way to the top, you are left feeling almost sorry for him when it all comes crashing down at the end, which I didn’t feel was in keeping with the rest of the narrative.

Slight squabbles aside, this was a fantastic piece of theatre and if this is flying the flag for modern British theatre then I’m excited!

Just got in from The Big Libel Reform Gig at London’s Palace Theatre and thought I’d jot down a few things I didn’t know this time yesterday.

1. People on the internet can be nice

When I woke up this morning I didn’t know I’d be going to the gig. I’d thought about it, but apathy mixed with having no-one to go with meant I decided to give it a miss. Until this tweet came along morning and I decided to go with it, thanks to Marianne (@noodlemaz). Turned out that for £20 we had pretty much the best seats, very front of the second circle, so could see everything beautifully. I was slightly hesitant about meeting people from the internet, but what can be more public than a 1,000+ auditorium. In fact, Marianne was lovely and it turns out we are both off to tomorrow’s Westminster Skeptics in the Pub to see Prof. Brian Cox, so I think that is a success.

2. Dara O’Briain’s wife is a surgeon

3. The techies at the Palace Theatre are shocking

The Palace Theatre, owned by Lord Andrew Lloyd-Webber is a pretty large West End theatre that currently houses “Priscilla”, and was the venue for tonight’s event. Clearly, the (in-house?) techies either couldn’t be arsed, are incapable or have some other reason for the shoddy production values of the event.

I can’t think to imagine how much it costs to hire the theatre for a Sunday, but it can’t be small given my experience of other venues, and yet the stage-cloth was terribly laid such that it had ripples all over it, the lighting mostly awful with live changes in the most awkward of times (and not when Brian Cox repeatedly asked for dimmed lights), inappropriate use of pink everywhere (fine for “Priscilla” maybe) and repeatedly poor followspotting; moving when the performer was still and vice versa. The host even commented on it! The use of colour was particularly lazy given the lanterns had scrollers mounted!

In fairness to the Libel Reform Campaign, as a charity I would rather they kept the money to spend on their aims rather than paying for nicer tech/more time, but some of these things would have cost nothing to change and, to my mind, are deplorable on the part of the venue.

4. Drinks prices in theatres border on some kind of robbery

There are plenty more things I also learned, given that the show was SO GOOD and had a brilliant mix of science/seriousness and stand-up comedy. I really wanted more!

If you’ve not done so already, please, please make sure you have signed the petition. Many good reasons for doing so are on the same website or in my previous post.

Last night I had the misfortune to go and see Grease is the word down at the Piccadilly Theatre in London’s West End. My verdict: don’t.

This was my first time seeing Grease, but like everybody I had a pretty good idea what the show entailed. I also wanted to see it as I’ve been following Grease:The School Musical which ended tonight (although I have it on PVR and haven’t seen it yet). Regardless, I was very disappointed.

Now, I’m not really a typical theatre critic, in that I come from a very “techie” background and so any sound/lighting problems will probably affect my enjoyment of the show more than others, but both the sound and lighting were truly terrible. The sound was bearable when the cast were using handheld mics, such as in “Greased Lightning” and in the finale, but otherwise it just sounded wrong (I can’t put my finger on why though).

The lighting was my biggest bug with the whole show. The standard of followspotting was just awful. I don’t care if the design calls for sharp half- and whole- body followspotting, it looks like stand-up comedy and detracts from the action. Using the followspot as the frontlight for the whole drive-in movie sequence was a bizarre choice for me, as there were plenty of other, more suitable lanterns out front and achieving a simple chase that actually looks like the actors are watching a projection is pretty standard stuff. The mirrorballs hung off the proscenium were never fully utilised and when they were used for the “prom/beauty school drop-out” sequence they were lit so poorly as to be useless. Continual blackouts also sap the show of any energy  and momentum it was building up.

Another unforgivable sequence in terms of lighting is the finale. For the biggest numbers in the show, to have a fairly static state (with just a chase on the back of the bar) is counter-productive when the cast are attempting to muster as much energy as possible (more on that later).

And then there was the set – I quite liked the cartoon/drawn paint effect that covers most of the set. In fact, I would probably say the set is the highlight of the show (or maybe the band up at the back, who are perfectly adequate for the show) Some of the neons are nice too, but it is just a pity the theme isn’t carried out further. The structure of the bleachers for instance, could be made more fun/cartoony and a few more props for “Greased Lightning” wouldn’t go a miss.

Eventually, we come around to the meat of the show for most people – the acting. Firstly, I don’t believe in the casting – the cast as a rule do not reflect the teenage nature of their fictional counterparts. More fundamental is the lack of energy the show builds up. This is meant to be one of the “happy, clappy” shows on the West End, comparable to the camp-tastic Hairspray. To draw any parallels to Hairspray is just unkind to a fabulous show. The cast struggle to drag the audience through the songs. In their defence, the script may not do them any favours, but it needs a lot more enthusiasm and bounce to be convincing.

If I were to give out stars: 2 stars would be my verdict. Better than that is my advice: Don’t bother, go and see Hairspray at the Shaftesbury Theatre instead.