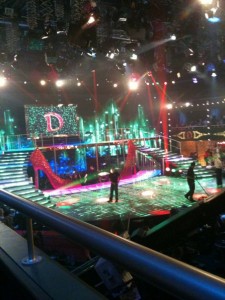 Stealthily taken shot from where we sat.

On Saturday I had the pleasure of watching Over the Rainbow not from my sofa, but live from the studio at Wembley. As luck would have it, it was a particularly good week to pick, being ‘musical theatre’ week and a double eviction. We also got to see Charlotte Church perform, but to be honest, it was a little bit ‘meh’ in my opinion.

I’m not going to commentate on the show, as there are plenty of other blogs that do that perfectly (such as Over the Rainbitch, who I only found today, and whose comments seem spot-on), but instead address a few things that you’d have to have been in the studio to notice.

As when I have been to a TV recording before, the audience don’t decide when to applaud – we are told when the applaud and when to keep quiet by a couple of people standing between the audience and the stage. This means when everyone claps whenever the girls reach a high/loud point, it isn’t because they are all idiots, but because they are told to. In fairness, it does look quite good on the telly like that, it is just really annoying.

The same went for being forced to clap all the way through Tamsin Outhwaite’s number. And she wasn’t even there: it was a pre-record, as evident by the fact that the audience in her segment aren’t clapping and yet applause is heard.

Obviously the live show is live, so any pick-ups wouldn’t be possible anyway, not that it really needed them, but even the second show Graham Norton only made a single mistake that had to be re-shot – that cannot be an easy task, being faultless for a good few hours. I was impressed. We did have a few pauses for costume changes, but I think that is fair enough – why rush around live like mad things if you don’t have to.

Her song warrants its own section because she had to do it 3 times to get it right, and do the interview with Graham twice as she forgot to plug the single the first time round (duh!). Not particularly forgiveable given she is supposedly the experienced singer to mentor the Dorothys, who manage to (more or less) get 3 or 4 songs right each week in a single take. It was especially torturous as the song is pretty crappy anyway.

Our first taste of the girls was when we realised we were sitting close to where they sit the guests/VIPs, so we congratulated/commiserated Stephanie on last week’s departure. The live show was relatively uneventful – I think it came across on telly the same way as it was in the studio. I definitely

think that Jenny and Sophie’s songs were chosen to try and unseat them; unpopular songs were never going to get as many votes as the well known numbers the other 4 produced. Combined with Jenny’s dog fiasco (again, I call fix…), it was predictable to see her go I think.

Sitting where we were, she then came up to join Stephanie which meant we got to have a chat (and a photo) with both of them. They were both lovely and relatively unfazed by the number of people wanting a chat/hug/photo. This confirmed my suspicions that I think I’d like to marry Jenny… 😉

In the results show, the only point of note was Sophie in the mash-up, as she managed to get the dance wrong (twice, I think). Having watched it back last night, I think she escaped having it broadcast though, but we saw! I also thought that Jessica did a good job of keeping composed after her elimination, and seemed to be in good spirits as she left, thanking well-wishers including us. It was also notable that the first person to talk to her after she came down from the moon was the Lord himself, who greeted her with a big hug, so it looks like she is gong to be in his good books for a while to come.

I’m glad that I didn’t manage to make it on TV, as I think I would have felt very self-concious,and despite the 2 and 1/2 hour wait to get into the studios, I’d definitely do it again and I hope I get tickets for either (both?) of the next two shows. It also made me remember how much I love live musical theatre, so I think a few more West End trips are in the offing!

4 thoughts on “Over the Rainbow – live from the studio”