So this is a bit late given it happened on Saturday, but I (once again) had the pleasure of watching Over the Rainbow live from the studio. This time I had the fortune of just turning up at the studio and hoping to find a kind soul with a spare ticket. I turned up at about 3.15pm and luckily found Lionel who (it later turned out) had a spare priority ticket, and so was in about the first 10 people to be allowed in to the studio! Thanks Lionel!

The gods must have been looking down upon me favourably that day, because I then got selected to be one of 8 people who got to sit in the stage right front row seats, when they weren’t being occupied by the munchkin kids who performed at various points. This gave me a prime opportunity to catch myself on screen, which I have duly uploaded here.

For what actually happened during the final (and the rest of the series) I can recommend Monkseal, Over the Rainbitch and (the extraordinarily named) Millie Moo and Chewbagga blogs. All 3 of these have me in fits of giggles at some of their insights during the series. Anyway, back to (me) the screenshots.

Here I am in the first show during the former Dorothy’s performance of Empire State of Mind: 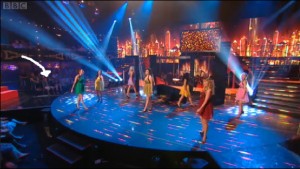 Ex-Dorothys perform. See me in the bottom left!

This was pre-recorded just before the first show, I guess so they didn’t have to all change into their ‘dorothy dresses’ live at the same time – would have been a wardrobe nightmare! I was sitting right next to the Dorothy benches as well, which meant I got to overhear their chat and watch them mess about before they performed. Highlights included the muchkin boys mocking Steph because with their hair all gelled up they were nearly as tall as her and them pulling faces at each other across the stage from the wing spaces. I’m glad that people who work in theatre’TV in “real-life” have the same fun/serious balance as I do in student theatre! Also overheard were most of the ex-Dorothys (particularly Jenny and Stephanie) complaining about the fit of their new colour coordinated shoes – now that the sequined slippers are on the shoedelier behind the Lord – and being desperate to take them off at the first oppotunity.

I was also on telly a few more times at about that size, but sitting so close to the benches meant I was in a prime spot for the eliminations! Here is a screengrab from the second show when Sophie went to meet her family: 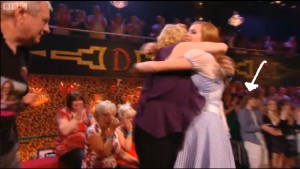 As Sophie greets her parents, there I am, lurking in the background!

Just before Sophie’s elimination, as her and Danielle walked down the stairs, I’d also like to claim responsibility for this smile to the crowd as I wished her good luck: 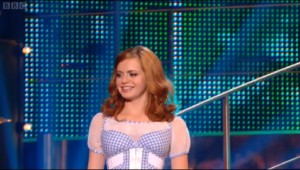 Nervous smile to the audience

At least, I’m 80-90% sure it was at that: it was at the same time as I called out, but equally there were a lot of well-wishers!

Another notable moment that didn’t show on screen was as Lauren was eliminate; during the farewell, Danielle carried the shoes to the Lord and stopped singing (or seemed to), which obviously worried Sophie as she was carrying the song so she gestured with a wave to all the ex-Dorothys to join in and help her out. It is funny some of the things you can see in the studio and not on screen!

It is a shame for me that Sophie didn’t win; on Saturday she finally gave the brilliant performances that I’d kinda hoped she would all series, especially her version of ‘Tomorrow’ against Danielle’s ‘76 Trombones‘. In fairness to Danielle, it was more of a rubbish song choice than anything else (as Sheila pointed out), but it did demonstrate Sophie did finally have the voice/talent required which I think was a revelation to many. I’d love to know what the exact votes were for Danielle and Sophie – it must have been very close I think.

In fairness, I’m not too worried; I’d pay to see almost any of the top 10 perform that role and have already booked to see The Wizard of Oz twice! And as for Sophie, given past precedent with these shows, I’m sure we’ll see her in the West End in the next year or two; and I’ll go and see that too!