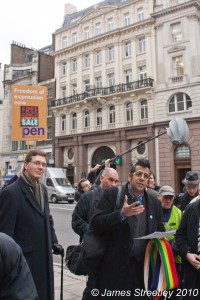 Last night I attended my second ever Skeptics in the Pub, this time at the Westminster branch which was entitled “Science Libel Survivors – Rally of the Skeptics”, and held the night before Simon Singh’s hearing at the Court of Appeal regarding his case with the British Chiropractic Association. (For those not familiar with Simon’s case, as Simon put it: the Jack of Kent blog is a good place to start… and end!).

As per my previous visit to a Skeptics in the Pub event, this was an entertaining, chilling and educational event and I’d recommend anyone to give it a go. I’ve heard a lot about Simon’s case thanks to the slightly geeky science, news, politics circle that I seem to move in (students), but hearing the tales of those being sued, particularly Peter Wilmshurst, really brought home to me the need for libel reform in this country. I know it is cliche, but it really is throttling the criticism of scientific ideas and their practice, which is no way to do science: a method which thrives on peer-review and having your ideas scrutinised.

Libel Reform supporters with placards outside the court

With that in mind, I decided to get up extra early this morning and trudge down to the Royal Courts of Justice to show my support for Simon Singh and libel reform in general before his hearing today. I also took the opportunity to sign the petition for libel reform, and encourage everyone to do the same, if not for Simon then the next journalist, blogger, scientist or medic who falls foul of someone with a lot more financial backing and has to retract their statement.

In terms of today, it sounds like a success from what I can see from those avidly tweeting the event with the hashtag #SinghBCA, with the judge’s posing some awkward questions for the BCA. The first news article from the hearing is at the Index on Censorship and Jack of Kent is due to blog about today’s hearing any minute, so I will leave it to those who were actually there and are of a legal persuasion to comment on what actually happened.

However, regardless of today’s hearing and the ruling further down the line, that doesn’t stop the ongoing reform campaign being massively significant, so I urge anyone that reads this to make sure they have signed up.

**UPDATE**
Jack of Kent has just completed his blog post on the day in court.

One thought on “Supporting Simon Singh”